This post has been edited for clarification, based on comments from some very wise friends. 1/12/2009

Knotting, macrame’, weaving is not new. Depending on what part of the world you live in determines at least in part what the knot or weave is called. What I know as a Girl Scout Lariat knot is also known as a Chinese cube knot. That same Girl Scout knot woven repeatedly in one direction, translates into a Chinese Zhu knot. What one person calls a Celtic knot I know also as a Josephine knot. What one person calls a Double Coin Knot, I call a Turk’s head knot. Are you beginning to see a pattern here? Knots are not new. Knots in one form or another have been around for centuries. What’s being done with them in regards to jewelry is fairly new.
One of my favorites is the Turk’s head knot. Corra recently previewed one flat, 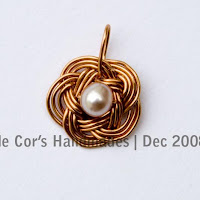 with a pearl center as a five petal flower knot pendant – her variation of a Double Coin Knot (its soooo cute)…..
That same knot, pulled differently, forms a band, and pulled even tighter still, becomes a ball. (I’ve made key chains with the ball version). Now I made these as a band years and years ago in cotton cord, as a bracelet. I’d weave it, stretch it on, run it under hot water, and it would shrink and conform to my wrist. People were amused by it, since it had no clasp and no apparent way to get it on or off. The fact that it was made with one continuous piece added to the amusement.
Loren Damewood teaches this knot as a band and creates some exquisite sterling and gold rings. I saw a picture of his rings many years ago, and thought “I know that knot, I can do that – right?” Well sort of – I’ve done ONE, although I’m sure I did it the hard way, since I wasn’t all that anxious to do try it again.
Diane Karg Baron has a tutorial for beautiful Celtic Knot Earrings, similar knots I learned doing Macrame’. Perri (who drew inspiration from and credited Remy Heath), recently did an earring tutorial ‘Mobius’.

Look closely, its a square knot from Macrame’. Now before you start running for your workbench to try it in wire, be warned, its not as easy as it sounds. Just because you know the knot in cord, doesn’t mean you can do it in wire. There’s a reason Perri’s earring “looks like” cord, but are made of wire. If you’d like to make these earrings or add this knot to your designs, Perri’s tutorial is worth 10 times its weight in gold – tips for creating perfect knots, and how to do it without tearing big gashes in your fingers in the process is priceless.
Since Corra’s and Perri’s tutorial and jewelry postings, several artists have “been reminded” of these and other knots, and incorporating them into their work.
Which brings me to the second half of my blog title. Giving credit where credit’s due. This is probably the single most important ideal out there; that some seem to forget or only “selectively” remember. This does not just apply to knotting and weaving or even just wire work, but all manner of jewelry creation.Many jewelry artists post a long speech in their tutorials about being given credit; or become quite huffy if they are not paid homage if their design is used and they don’t receive credit for it, yet when it comes to their own admissions as to what or who inspired them, well those admissions are conspicuously missing. The only reason I can think of for this is possibly a belief that it will somehow diminish their artistic credibility. This is so far from the truth, it couldn’t be more wrong.
What some people fail to realize is that the Internet has a LONG memory. Sooner or later fans of your work will find out where you got your inspiration from, or who reminded you of a knot you forget you knew. And since you have claimed from the beginning that the idea was yours, or simply even neglected to to credit your inspiration, you end up in a bad light. Even if it wasn’t your intention, you look like you stole some one’s idea and ran with it. Had you, from the beginning, said something like ” I was inspired by so-and-so’s beautiful piece, or reminded of this knot by so-and-so, to create this variation”, your fans would have not thought any less of you. Quite the contrary, they would have thought more you, because you were generous enough to admit to being inspired by another artist.
Please know, I do understand that SOME designs are timeless and knowing (or proving) who thought of it first is next to impossible. Also, true coincidences however rare, do occur. It is entirely possible for 2 artists, who have never come in contact with the others work to have similar designs. Its also possible to have ‘seen’ someone’s work, and have it influence your work, many months down the road. Do you remember who’s design that was? Probably not.“When artists frequent the same forums, and message boards , and collective blogs, coincidences, and accidental influences greatly diminishes – not that its impossible, but much less likely…“Perri J. (one of my very wise friends I mentioned) said it better than I ever could – quote” In fact, some of us take part in forums where part of the appeal is the open sharing of our best, most recent work, our most exciting creations. There is an expectation in these places of peer review,and kinship in artistry. It becomes a bond. When that bond is violated by the failure to acknowledge the influence of your friends and peers, everyone loses. We all lose the opportunity to see fresh inventive ideas, because the sense of betrayal causes hesitation, at the very least.”
Do I sound like an “ex-fan”? Its because I am; a very disappointed and disillusioned one. Recently I found out that one of my favorite tutorials, from from an artist I had great admiration for, was not their own idea. Yes their design for the tutorial is different, but not so different; seeing the original design from the ORIGINAL artist there is no doubt where they found their inspiration. I do not say this lightly – nor was it even the original artist that pointed this out. And believe me, I did check for myself. The cover piece for the tutorial IS definitely different, the “prototypes” and variations in the tutorial however leave no doubt. Now had the writer used something similar to my earlier example say “I loved so-and-so’s piece and was inspired to create my variation of it”, I honestly would have had NO problem with it. It would not have taken anything away from their design. To learn that this same writer has done this numerous times – drawn inspiration from other artists, without giving the small courtesy of credit for it – actually hurt my feelings; I feel somehow betrayed. I still admire this person’s artistry and skills, I just feel that at their level of skill, the omission of acknowledgment to a fellow (equally talented) artist, amounts to a snub, and seriously unprofessional.

Now – before someone tries to accuse me of being a pot calling the kettle black – I’m not. I have no problem whatsoever telling anyone where an idea comes from, if I was inspired by another artist. Case in point – Snowflakes to Butterflies. Many of you have seen my posts “When Snowflakes Melt, You find Butterflies. Corra used her Cube knot version and created a wonderful Snowflake design

. I used her knot version and came up with butterflies 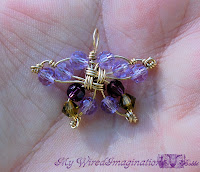 (shortly after that Corra posted Where there is Butterflies, You Find Flowers). I posted everywhere, what and who had inspired my design. I received tons of positive feedback, So did Corra – we both won! Do you think my Butterflies would have been so well received had I posted it, with no mention of Corra? NO, it wouldn’t have – As a matter of fact, I would have probably gotten negative feedback. I wouldn’t have even had to claim the design as my own, just leaving out what and who inspired me would have made me look like a thief and a copycat.
There is nothing whatsoever wrong with admitting where or from who, you found inspiration. I truly don’t understand why people think there is. Oh and don’t think for an instant, that because an artist has been around less time than you, that they somehow deserve less recognition; they don’t. A fellow artist that inspires you, deserves credit whether they’ve been around a few months, few years, or few decades.

Both Corra and Perri have new designs (tutorials) out. Corra’s “Friendshipband Bracelet” 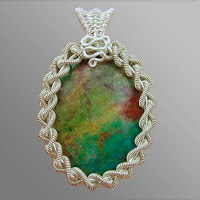 “Celtic Braid Pendant”, have already given me ideas for some rather spectacular (IMO) designs/variations. What do you want to bet, that when I get my variations done, and give credit where credit’s due, that we don’t all win?

Give credit where credit is due! I think – no, I know, you’ll be surprised how much more positively your work is received, and everyone will benefit from sharing.

Thank you for visiting –
This post is also at http://KarmaWired.blogspot.com and http://Jewelrylessons.com
~Bobbi……
“What is worse than no sight, is being able to see, but having no vision.” ~Helen Keller