Some of my babies are difficult or near impossible to photograph ~ Pluck and Feather for starters. They are a mated pair of Swainson’s Rainbow Lories. I’ve actually tried to photograph them, but the god-awful noise they make at even the slightest sight of the camera, probably amounts to some very un-repeatable swear words.
Pluck got her name, because my poor baby’s previous mate either found her feathers extremely offensive, or was just overly amorous. She has her wing feathers, some body down, a few cheek feathers, but that’s about it. One of my roommates teases she’s the ugliest bird on the planet. Feather, her current mate, on the other hand, is absolutely perfect. Hence the names Pluck and Feather. The only problem Pluck’s previous plucking has caused, is she seems to have adopted the same bad habit. Her chicks have to be removed from the nest, almost as soon as they start to pin. All the babies feathers are fair game, but especially the top of their head. They come out of the box looking like a teeny, 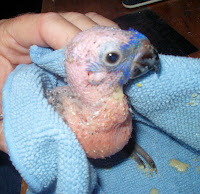 tiny Friar Tucks. I have to remove them soon after she starts this, so the feather folicles don’t become permanently damaged. I actually hate to take the chicks from them, and if it weren’t for the plucking, I wouldn’t until they were just about weaned – they both “cry” for a couple days after 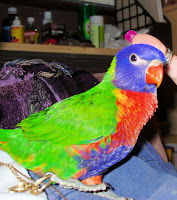 the chicks are removed. I’m happy to report though, that all of chicks have grown up to be perfectly feathered like ‘Daddy Feather’.
Pluck is incredibly shy, retreating to her nesting box whenever I approach. Feather, however is not. His swaying and posturing leave no doubt whatsoever, that should my fingers come just a bit too close, he would gladly rip them open for me. And don’t be fooled, just because Lories are nectar eaters, doesn’t mean they don’t have a beak sharp and strong enough to do just that.
If you ever have the opportunity to own a Lorie, breeder or not, you wouldn’t be disappointed. They are a wonderful bird species, whether they view you as parent, friend, or just a tasty snack.

Thanks for visiting………
~Bobbi
“Dogs come when they are called; cats take a message and get back to you later.” ~Mary Bly