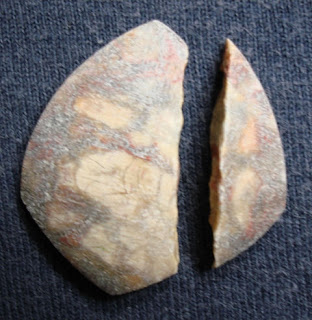 Not to long ago, on my favorite message board ‘Evolutions In Stone’ , Blarneystone (Dan), wrote a post called “Heart Breakers – Cabagons”, in which he shared numerous photos of some real heartbreaking cabbing mishaps……getting caught on the wheel and slung across the room – chipped at the last minute – dropped on the floor during final polishing – you get the idea – boo boos, that make you cry arrrgh….. One that really made him sniffle was a favorite that ‘came apart at the seams’ Forest Fire Jasper – For some reason the stone really attracted me even in such pitiful shape – So, as bold and brassy as I can be (sometimes), 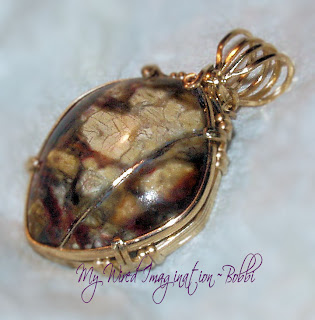 – keep in my I’ve only been on EIS since the end of January this year – posted that if he still had the stone – hadn’t chucked it in the garbage, or out a window – and could put a shine on it, to send it me and “let me try and wrap it so it looks like you meant to do that”. pretty gutsy huh? I kinda had an idea in my head, but not a fully formed one, and after Dan went to a lot of trouble to glue the stone together to polish it, then get it apart, and send it to me, I started to waver in my resolve a bit. …….It had been sitting in front of me for over 3 weeks, until today when I finally decided to jump in and take a bash….. 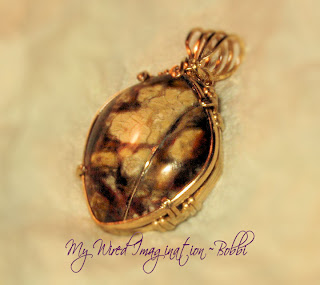 It’s not exactly what I had in my head but it I think it turned out kinda cool anyway….. You’ll have to let me know what you think…..

The whole piece is wire wrapped in 14K GF wire, including the “seam” in the stone – not an easy trick, but it worked pretty well – I have been working on forming the “seam”wire on and off since I got the stone in the mail. I think the effect I was going for would have looked better, had the seam been zig-zagged, but the break wasn’t planned, sooooo….. 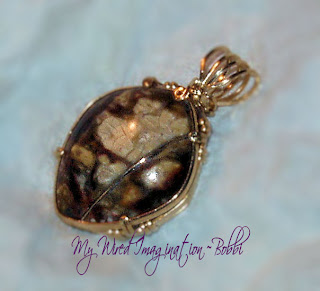 I also did the gold bezel around the stone, so it would look more ‘finished’ when I set it.

It’s going in the mail tomorrow, back to Dan – I only wanted to wrap it, not keep it. He sent along a few other cabs he had cut – said he couldn’t send along one sad little broken stone – I hope he thinks my work makes us even. I will have to get a piece of this for my own ‘collection’, the stone really is pretty.

All that we are is the result of what we have thought. The mind is everything. What we think we become. – Bhuddha