Hmmmm, where do I even begin with Fred. 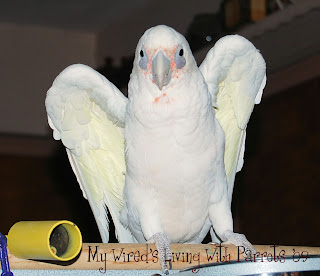 First off, he’s a Bare-Eyed Cockatoo, and the reason I almost didn’t get BabyDoll. Fred is definitely a rescue. He had 3 homes and 2 stints in a pet shop before me. When I got him, he had been in a pet shop (the second time) for about a year.
I blame his first home for many of his worst issues. From what I could find out, they took young Fred home, placed him in a nice enough cage set up in the family room. One very important thing they forgot was to put up a gate, at least temporarily, to prevent their 2 very large dogs from running up to the cage any time they felt like it. To compound the issue, the cage was fairly low, putting Fred at eye-level with the dogs. People’s stupidity, or if you prefer, ignorance astounds me. It is amazing how many “educated” adults fail to realize and acknowledge a parrots prey mentality. Unless you prove otherwise, they view just about everything as something that is going to eat them. Nature has programmed them that way for survival.
After about 3 months, Fred’s first owners brought Fred back to the pet shop, and begged them to take him back. Even though they shared their dogs intense interest in him, they couldn’t understand why Fred SCREAMED non-stop. Now if you never heard a Cockatoo scream in distress or fear, it is a blood-curdling noise comparable to fingernails on a blackboard magnified 100 fold.
Fred didn’t fair much better in his next 2 homes. They both had dogs, and though they didn’t allow the dogs to inspect Fred at will, they both went with the opposite “faux pa”. Every time Fred screamed, they came running – “awww Fred, poor Fred”. Bad move….. Now I’m not saying that should completely ignore a distress call, but running to it every time it screams, only teaches it how to call you to come. Both of those 2 homes did seem to really care for Fred, but were over-whelmed with a large ‘Too with emotional issues. 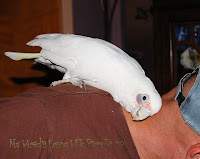 When I met Fred, his screaming had been reduced to a minimum, being there were no dogs in the pet store. Now I have 2 dogs – an English springer, and an African Mastiff, but I felt confident (or cocky depending on your point of view) that I could help Fred overcome is early bird-hood trauma. That coupled with the fact that it was painfully obvious, he would have no other choice than to live his life in my friend’s pet shop. I just couldn’t stand that thought..
After a trip to the vet, standard fair for new arrivals in my home, Fred was introduced to my already abundant “Noah’s Ark”. I’m not sure, but I think the presence of all the other birds in my house was somehow a small comfort. When we got home, I kept his travel cage covered for a bit, to lesson the trauma of a new and strange environment. The cage I had set up was (is) huge. Its actually a double meant for multiple Macaws. he now lives in one half – Laci my African Grey, his next door neighbor. One big plus for Fred is the cage is very tall (almost 8′). He can get well above head-height if he chooses (not something I’d recommend for every bird, but that’s another post).
After he got settled in and comfortable and happy enough to munch some lunch, I let the dogs out of the bedroom. Now my birds have their own room with a gate; the dogs can only walk by, not go in the room. By the way, my dogs, unlike most, have no interest in the birds whatsoever, except for the occasional treat that the birds fling at them. Fred’s initial reaction at seeing the dogs was as expected – he started to scream. I responded in a very “matter of fact” tone of voice that it was okay, and quietly ushered the dogs outside. Fred almost immediately quit screaming; he actually seemed confused at the dogs lack of interest in him. 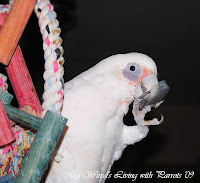 Over the next week or so, the routine was the same – if Fred saw the dogs, and screamed, I simply (not all gushy) reassured him it was okay, and took the dogs outside. When Fred saw the dogs and didn’t scream, I rewarded him with his favorite treat, warm carrots and honey. Amazingly the screaming stopped (where the dogs were concerned) fairly quickly.
It took Fred nearly 6 months to fully settle into the house and the daily routine. Now Patches (my Springer) has NO interest in the birds whatsoever – the walking marshmallow could care less, even if one flies to the floor. Suie my African Mastiff’s only interest is the bird’s food – including seed. In the beginning if she ventured to close to the gate in her never ending quest for goodies, and Fred became upset, I simply (gently) scolded her and ushered her away from the gate. It didn’t take long for Fred to figure out that Suie’s only interest was his flung food.
These days Suie is a constant source of entertainment for Fred. Fred will deliberately drop seed, peek over the bars to see if Suie is picking them up, and them grab a foot-full of seed and pelt her with it. Her being startled by this, amuses Fred and he starts laughing. if she won’t come over on her own, Fred actually calls her – “come here, Suie, Suie, come here”. She gets pelted with seed if she actually falls for it – which she does, every time. The other favorite entertainment? Fred waits for Suie to lay down and dose off. Fred has learned, that if utters a certain screech, Suie will jump up, run to the front door and bark. Fred being so high up, he can see the driveway and anyone it long before the dogs – that’s actually how that started – now when Fred is bored, he gets amusement from sending Suie to the front door barking. At that point Fred and several of the other birds start barking, and Suie just wonders off to the bedroom to sleep.
Fred has lots of other issues – he is after all a ‘Too – but I’ve rambled enough for one day.

Thanks for visiting
~Bobbi
“You can learn many things from your children. How much patience you have for instance.” ~Franklin P. Jones

BabyDoll is a Goffin’s Cockatoo, and one of my youngest. 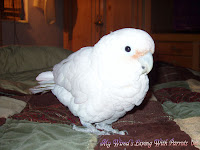 She is a semi-rescue. After ‘rescuing’ Fred (my Bare-eyed Cockatoo), I swore I would not get another ‘Too. Not that they’re not sweet birds, they are, UNLESS they have been badly re-homed, abused, neglected, even accidentally taught bad habits, they can be absolute monsters. OR in the case of BabyDoll – forced weaned. Force weaning is the morally reprehensible practice of unnaturally accelerating weaning to get a bird on the market faster. In general the larger the bird, the longer they take to wean. Macaws can take up to a year to properly wean, Greys and Toos anywhere from 4 to 6 months. There’s really no hard and fast rule, but there are general guidelines. But you can’t go from spoon feeding one day, and solid food the next, with no further spoon feedings. It amounts to the same thing as bottle feeding a human baby one day, and the next day handing the child a hamburger.
It wasn’t immediately apparent, BabyDoll was forced weaned. When I first saw her, she cried whenever you got close to her cage, not uncommon with young birds in new surroundings. I thought she was cute and cuddly, but outside of that, I had no real interest in buying her.
After several weeks (I visit this particular shop once or twice a week) the “baby crying” not only didn’t stop as it should have, but became incessant. I continually pressed my shop owner friend, and bit by bit learned BabyDoll’s childhood. The breeder had indeed been in a hurry to “get rid of BabyDoll”. She had made a grievous mistake with BabyDoll’s older sibling, and it had died. Actually it was killed by the breeder’s Husky, when she left it on the kitchen table to go get the mail. Aside from the loss of income for the bird, she was supposedly too upset to take anymore time with BabyDoll, but assured my friend BabyDoll was fully weaned and indeed ready to go into a shop – LIE! 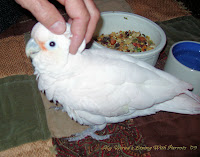 One of the clues (aside from her admissions), that BabyDoll was force weaned was her beak. Young birds beaks are not putty, but can become misshapen, and “scissor beaked” if too much force is repeatedly applied to one side, such as with a syringe during feeding. Think of it like a toddler becoming buck-toothed from sucking their thumb.
BabyDoll’s incessant crying – one of the physical and psychological side effects of force weaning, was becoming apparent to doom her to live her life in the pet shop. My shop owner friend said that while everyone who considered buying her thought she was “cute as a bug”, they couldn’t stand the constant crying and begging, which didn’t stop even if you picked her up. She actually got her name because the crying sounded so much like a human baby crying.
Some may say I’m a sucker for the ‘underdog’, but no one else was going to “step up to the plate”, and I bought BabyDoll. Before we went home, we paid a visit to my Avian Specialist at the vet’s office. He very gently reshaped BabyDoll’s beak, to give her a better chance of it realigning normally. She received several different nutritional shots, since she was severely underweight, and undernourished. After much discussion with my vet, it was decided, that I go “back to the beginning” and hand feed her in an effort to wean her correctly. For those that think hand-rearing and weaning a bird is a cakewalk – think again. Its a serious commitment, that takes an extraordinary amount of time and care in the best of circumstances, let alone compounding it with psychological issues.
When I got home with BabyDoll, I started from scratch, feeding her every 3 to 4 hours as if she had just been taken from the parents. She had no problem accepting hand feeding, since that’s what she had wanted and needed all along. When her weight came back up to an acceptable weaning weight, I gradually added a seed, nut, pellet, fruit and veggie mix to her mealtimes. She “weaned out” of her own choosing (as it should be) in about 2 months. As she showed less interest in spoon feeding (I hate syringes), we played more with ‘big bird food’. 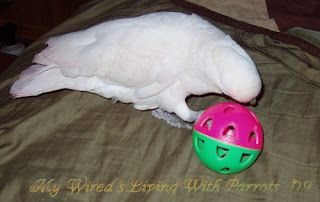 The incessant crying stopped in about a week after getting home, since she was getting what she needed. There was the occasional begging around meal time, but not the heartbreaking squalling. She still has serious mental issues we are working on, but that’s a whole other novel.

Thanks for visiting…..
~Bobbi
“Nature is the art of God.” ~Ralph Waldo Emerson